Eco Tourism in the Dominican Republic

Eco Tourism in the Dominican Republic, a growing trend ( updated). The DR protected areas receive an average of 800,000 visitors each year that come to enjoy the beauty and natural scenery including beaches and mountains.  This is fueling a segment of the   Dominican   economy as never before, and prompting investments in the North and East coasts such as the  newest  ecologically friendly Monkey Park in  Sosua , Puerto Plata and the two marine themed park in Cofresi ( Ocean World ) and Bavaro ( Manatí Park ).

Built within El Choco national park, the Monkey Jungle offers zip lining adventures within a monkey sanctuary surrounded by mountains and lush green areas. The owner built this park attraction in order to finance a clinic for poor children in the area.  The first zip lining tour and the most successful in the area is Yasika Adventures, closer to Cabarete than  Sosua. 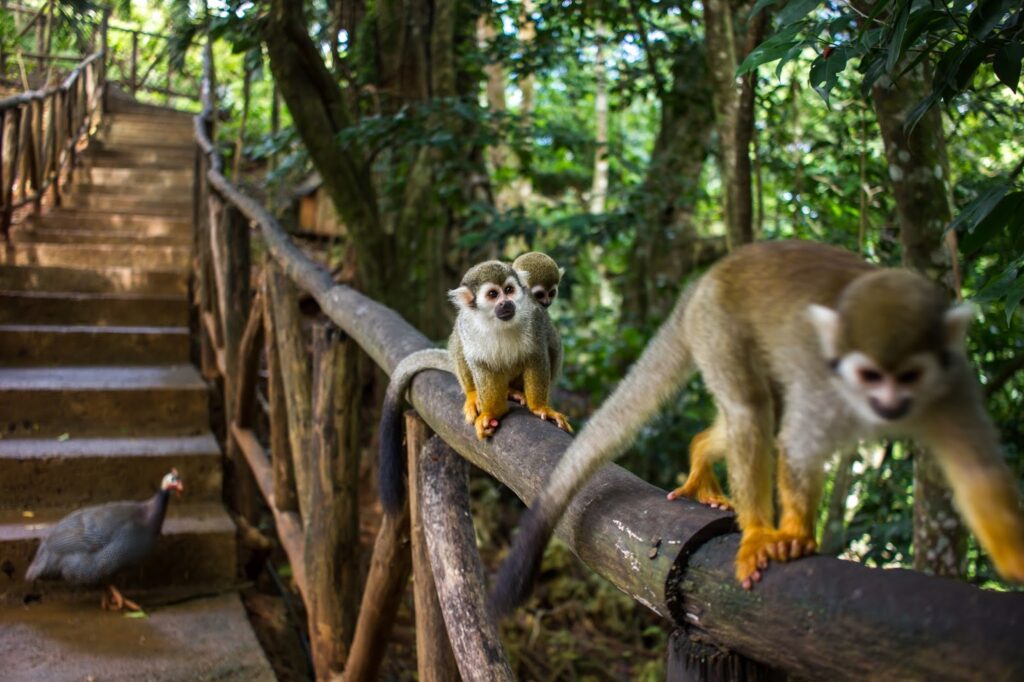 Monkeys roam free inside their habitat at Monkey Jungle.

One of the oldest eco tours in the  Dominican   Republic   takes some endurance to complete, and it is the highest mountain in the island, The famous Pico Duarte. Pico Duarte is the highest peak in all the Caribbean islands. It lies in the Cordillera Central range, the greatest of the  Dominican    Republic’s   mountain chains. It stands at 3, 140 meters high and named after the biggest hero and forefather of the country, Juan Pablo Duarte.

A trip to El Pico is an adventure most   Dominicans   love to take, partially on foot and on donkeys. There is a well-maintained system of trails leading up to the summit, with trailheads at several locations The easiest access is from the town of La Ciénega, near Jarabacoa. The trail is 23.1 km (14.4 miles) to the summit, with a total elevation change of 1,977 meters, and a shelter 5 km away from the summit.

Other names in the eco-friendly business of the North coast are Rancho Montana and Outback Safari, which offer tours to mountainous areas of the   Dominican     Republic   crossing rivers and usually ending in a farm like compound with farm animals, horses and traditional cooking. Some of the tourists that rent  Sosua   villas  book ecotrips in advance, showing the interest for being closer to nature when vacationing the Caribbean island of Dominican Republic. Real estate boomed in the North coast towns because of all the natural attractions of the area.

Areas such as La Boca in Cabarete offer river jungle tours where visitors get to see  Dominican  birds in their natural habitat, ending the tour in a small “zoo” that holds local fauna such as the  Dominican  Hawk, local vultures, Crocodiles, iguanas, pythons and other more common local birds. Iguana Mama is one of the largest eco tours operators in Cabarete, with a very well organized structure and a wide range of options including biking, hiking, rafting, kite boarding, kayaking and a lot of other extreme tours.

An already known and well documented eco tour takes place in Samana, at the North eastern part of the  Dominican    Republic  , whale watching. This is perhaps the most rewarding  experience , one that inspires respect for nature as the viewer is mesmerized by the sheer size of those wonderfully large, friendly mammals.

Eco tourism seems to be growing in the  Dominican    Republic   because of the laws protecting the environment, something that most people hope will remain enforced for much longer into the future generations.  Many foreigners and locals have turned their fincas (farms) into eco sanctuaries such as Tubagua from Tim Hall, and Rancho Luisa in Veragua.

For horse riding lovers there`s a variety of choices including the classic Sea Horse Ranch, which is mainly for professional riders of very fine horses, and the more adventure type ones as Rancho Luisa and El Paraiso Del Caballo ( this one located in El Choco ).  Several other horseback riding tours are available through various agencies  in   Sosua , Cabarete and Puerto Plata, and can be done in the beach.

One of the best ecofriendly tours that most of the time is associated with beach resorts is snorkeling and diving.  Sosua  holds the top place in the North coast due to its large number of diving spots, and recently there was a government plan in place that introduced man made reefs into some areas that are now full of colorful tropical fish. Having shifted its economy in the past 30 years from the previous model of sugar cane production and free zone into a tourism destination and telecommunication –based outsourcing, the   Dominican   Republic  now finds its true self using the best of its land. 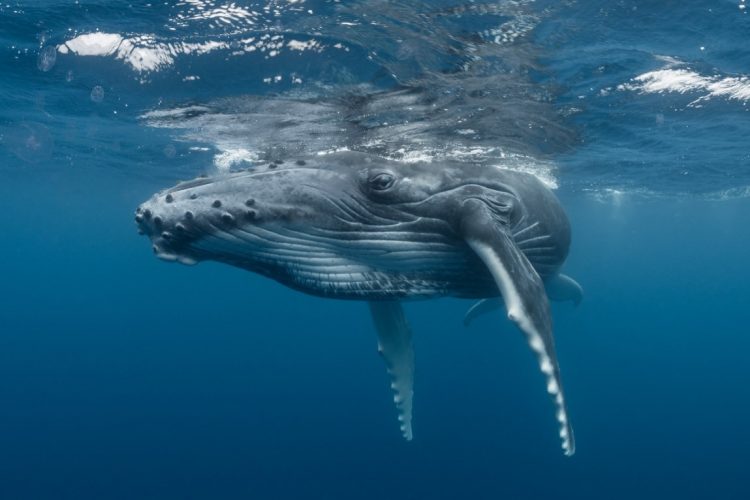 The humpback whales visit the island in March for over 6 months.

The data is contained in the book “Protected areas of the Dominican Republic, pure nature”, by José Manuel Mateo Feliz and Adolfo López Belando, work done with support from the Vicini Group and the Institute of Geography and History of the Organization American States (OAS). The authors note that eco-tourism is mainly developed in protected areas, providing a space to promote full contact with nature.

Land conservation offers opportunities for recreation and observation of landscapes, birds, recreation and environmental education. Within the six categories of protected area management are the natural and cultural monuments, of which the country has 28 with an area of 634.94 square kilometers, according to the study of Matthew and Lee. A natural and cultural monument is an area that contains one or more natural features and / or cultural groups of outstanding or unique value for its inherent rarity, representative or aesthetic qualities or cultural significance.

Diving can be a great experience in the DR, specially around Sosua with its wrecks, reefs and caves.

The mountain range – cordillera- is full of life.

The cordillera Central is a mountain chain that crosses the island diagonally, and it is where Pico Duarte ( El Pico ) is located. Green areas and several national parks nearby make it a unique eco tour. The monument of Cabo Frances, located in the province of Maria Trinidad Sanchez (Cabrera), is a small promontory jutting into the northern coast of the island with a linear line of 5 miles between coasts, reefs and beaches.

From the top of the cliff it has a broad vision of great scenic beauty of the coastal marine area.  From the coastline, humpback whale watching is possible in the months of January to March. At the Salto El Limon in Samana the most remarkable element is a cascade or waterfall of 40 meters. It houses a large population of the endemic flora that also provides refuge for unique bird species native of the island. Water production is a vital element in this protected area, including Arroyo Chico, which is the one that feeds the waterfall, which is the emblem of the monument.

The flora and fauna here is abundant

The sand Dunes located in the province Peravia (Bani ) includes spectacular dunes, only seen in the island of  Dominican   Republic  in the Caribbean.  It also contains a number of wetlands on the coast of the bay of Las Calderas. The tour of the dunes is impressive and is facing a large-scale beach lapped by the Caribbean Sea.

A lot of Flamingos are part of the local fauna. The visit to the protected area can yield interesting vies of the  dry forest that grows behind the beach and dunes, with all their associated fauna. The coastal lagoons are large areas of mangroves also of great importance for the conservation of biodiversity, for researchers and visitors who come to the protected area.

A beautiful small piece of land, The Catalina is a small island six miles long with 500 meters sea strip. It is located in the province of La Romana. It has large sand dunes and is a nesting of several species of sea turtles.  The coastal zone includes coral reefs that form a cliff 60 meters deep.

Taino hand paintings in the caves.

Also you can dive into the wreck of the pirate ship that is attributed to the legendary English Captain Kidd. The monument of the Cave of Wonders, in the province of San Pedro de Macoris, includes a cave with rock art, considered one of the most important in the Caribbean.

This cave has important archaeological value that draws interest because of the presence of about 300 pre-Columbian paintings. The caves of Las Maravillas in La Romana, Dominican   Republic  have an impressive set of high ceilings and light reflections that might be almost unique in the world. In the beach towns of  Sosua  and Cabarete there`s El Choco National Park with its caves and the Cabarete Lagoon.