Fishing in the Dominican Republic’s North Coast is one of the best experiences of its kind in this fabulous Caribbean island, offering professional-grade fishing with fine trophy such as Mahi Mahi, Sailfish,  Blue Marlin, Barracuda, Red Snapper, Sea Bass, Yellow fin Tuna, Wahoo, just to name a few. The blue waters of the Atlantic Ocean give way to excellent fishing from Puerto Plata or Sosua, also there is a Marina in Cofresi, part of the Ocean World complex. Several fishing charters can be rented from Puerto Plata and Sosua, departing from the beach.

FISHING IN THE NORTH COAST TOWNS OF PUERTO PLATA AND SOSUA

The Dominican Republic is located in the central Caribbean, is about 1.150 kilometers of coastline. Its waters are characterized by being very deep, common in most of its coastline too, and having depths of several thousand feet just a few miles from the coast. Its waters have abundant pelagic species, especially the blue marlin and white marlin. White marlin fishing is fun and requires dexterity of a fisherman, but fishing for blue marlin is what captures the passion of many fishermen, since this is a magnificent fish, known as a great fighter. One of the top charter yacht rentals in Sosua used in tours is the 52` Hatteras, The Angels. 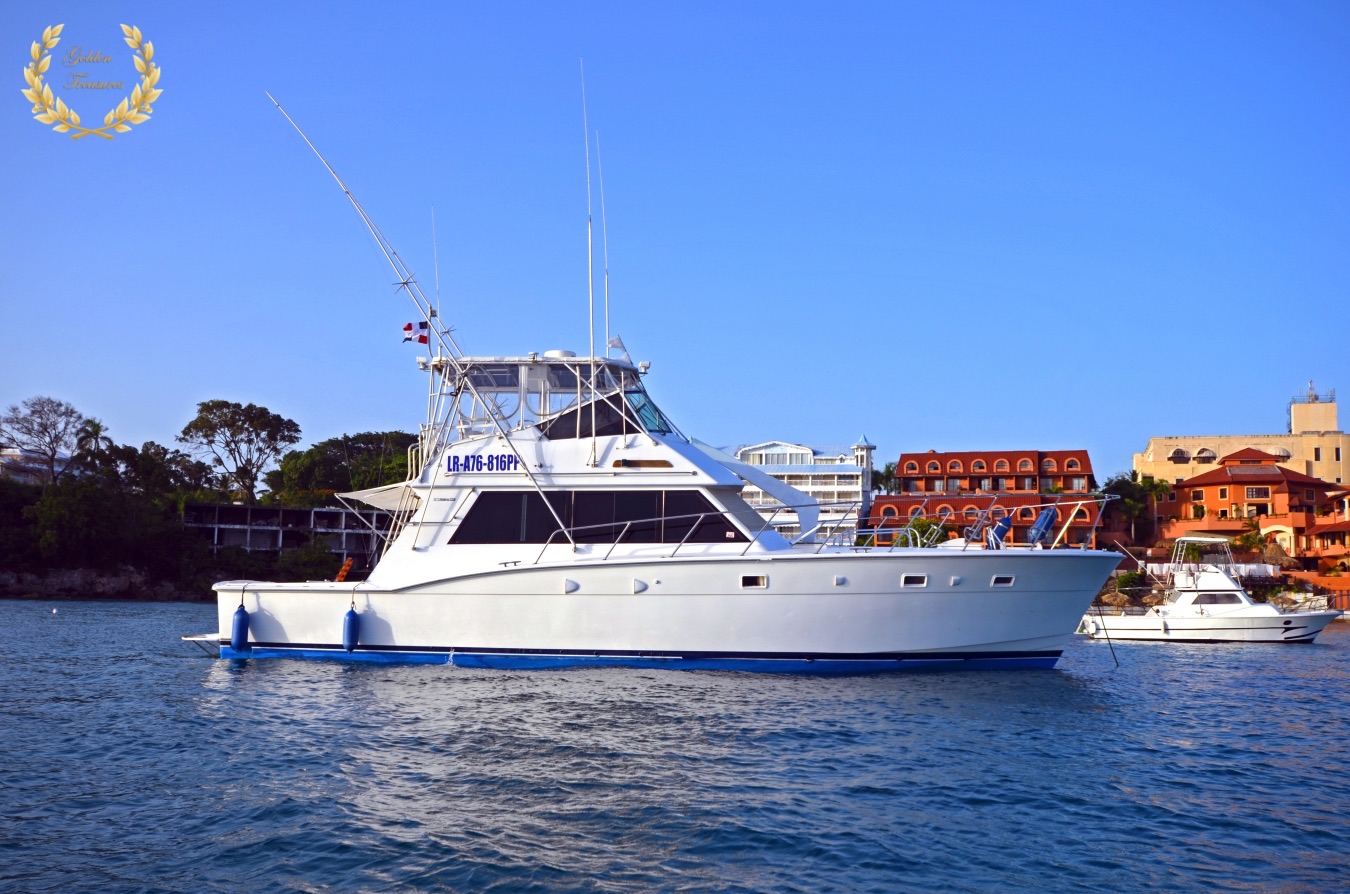 A great option to go fishing in Sosua, the 52` Hatteras. Click the photo to view the details.

Although most blue marlin that are caught are usually between 75 and 200 kilos, specimens have been captured up to 400 kilos by anglers and commercial fishermen on some occasions, who unfortunately still kill these magnificent fish, but report some over 500 kilos. The waters off Puerto Plata’s Atlantic Coast have the most abundant fish, and since Sosua is just minutes away one can also depart from Sosua beach and head North. Dominican Republic fishing in these areas of the north coast has been famous since decades ago, specially for commercial fishing off shore.

On the south coast of the island,  Puerto Plata fishing Dominican Republican abundance of blue marlin between 75 and 150 kilos, and during spring it is common to release 5 to 6  in one day. In some exceptional days, some boats have released over 10 fish. In the Mona Passage, on the east coast of the island, the waters are a little less deep, but still reaching depths of over a thousand meters of water just a few kilometers of 100 meters, which provides a depth structure well suited for the marlin. In this area the largest marlin usually being the most common between 100 and 200 kilos, but all seasons show larger specimens released .

The specialized anglers use boats, equipped with booms and fishing chairs. As the waters of the Caribbean can be high, the boats usually have more than 10 meters and most go for 15 meters and more. A smaller version fishing boat is the 35` Bertram that departs from Cofresi`s Ocean World. When it comes to fish the larger specimens, commonly used lines of 80 pounds (37 kilograms) in palote curved rods. The reels are brake lever (lever drag) and capable of imposing up to 40 pounds of brake. Among the most popular reels are the Penn and Shimano. 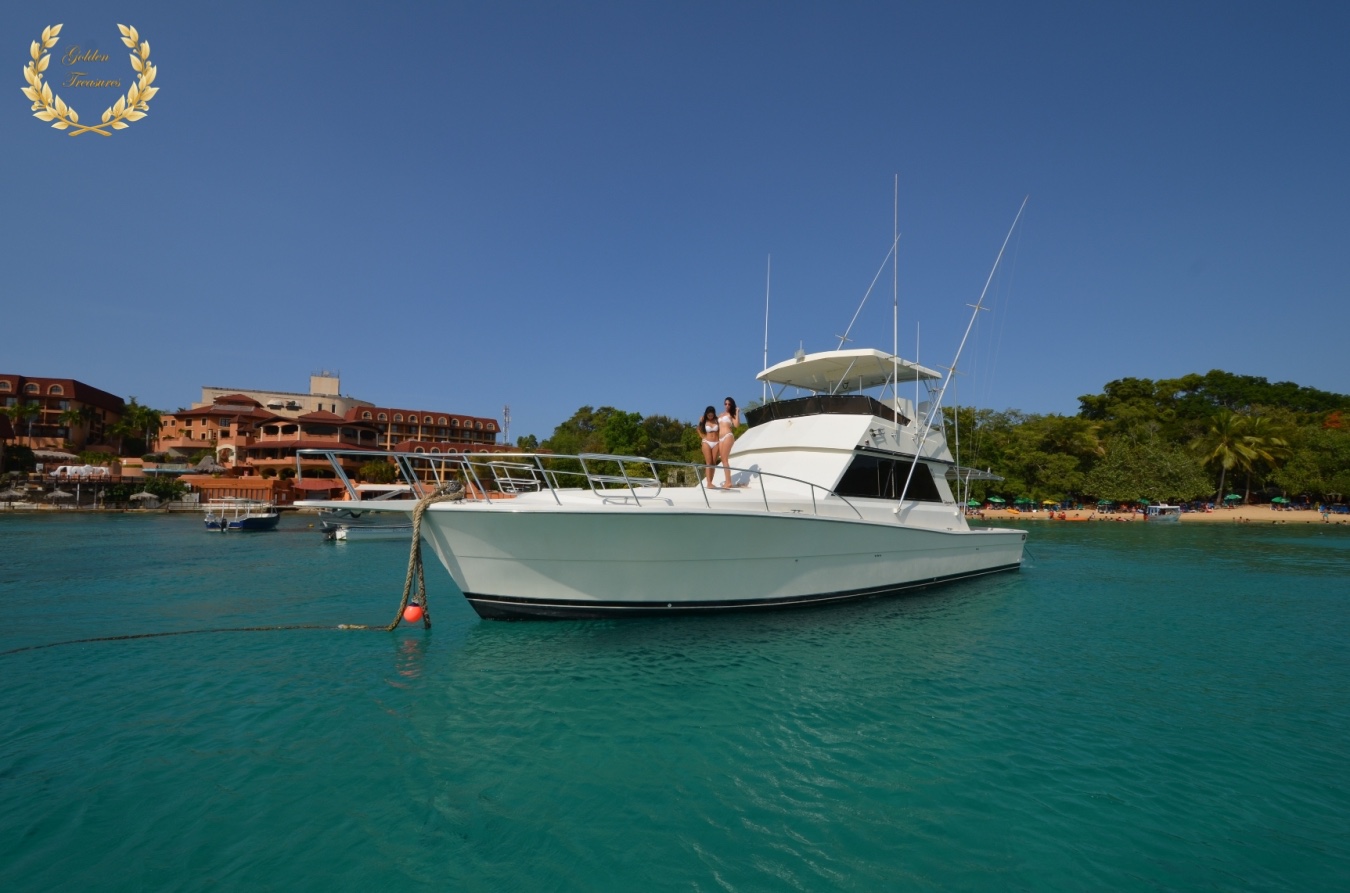 The 48` Viking is fully equipped for fishing and sailing in Sosua.

Although also used dead natural bait, the most common is the artificial lure with one or two hooks, typically 10 / 0. These trolling lures are carried between 7 and 9 knots. Typically, fish 4 decoys, subject to the booms with heavy rubber bands or clips to some 12-15 pounds. Some sharks are fished off the waters of Puerto Plata and Sosua, though most species are not dangerous ones.

There are available fishing classes for beginners, mostly departing from Sosua beach. Many tourists rent a fishing charter just to teach their kids their first experience in Dominican Republic fishing. there are several providers of fishing boat charter services in Puerto Plata, Sosua, Luperon, Cabarete and Cofresi. You can call 829-477-2038 for the boats you see in the pictures, the Julie II, Angels and Silver Fox, which depart from Sosua Beach. Also there is Puerto Plata Fishing Services, Caribbean Marine Water Sports, and Aligatour. all which offer fishing tour services in the North Coast of the Dominican Republic. Golden Treasures Dominican Republic Villas offer luxury and affordable vacation rentals in Sosua, Cabarete, Cofresi, Cabrera and Puerto Plata for all your lodging needs.

THIS PAGE IS BROUGHT TO YOU COURTESY OF: