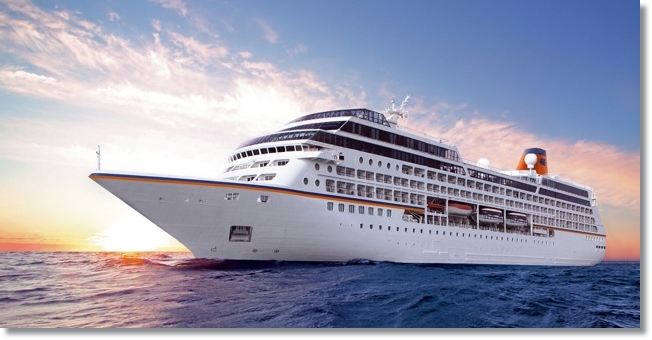 Early in January 2015, Puerto Plata saw the start of a new era as a preferred tourist destination in the Dominican Republic, as Carnival Cruise Lines will inaugurate its flagship hub port in the Americas, based in Maimon Bay. Several cruise ships have already visited, starting with the MS Hamburg in March. The cruiser “HAMBURG”, is exclusively dedicated to the German cruise travel market by the operator Plantours & Partner, and it was built by the shipyard Schiffswerft GmbH in Wismar, Germany in 1997, and has already Nassau Bahamas flag and port of registry.

This large boat has 145 meters long, 21.50 meters to 5.100 meters sleeve draft, has 170 crew and consists of 197 cabins and 8 suites. The arrival of the cruise “HAMBURG” to the pier of Puerto Plata  gathered the authorities of the Dominican Port Authority (APORDOM), Ministry of Tourism (MITUR), City Hall, Provincial Government, and others. Preparations include government agencies that coordinate efforts to enable and adjust the local port to provide a proper reception to the tourists coming in the ship.

The Ship interior is pure luxury

The German cruiser “HAMBURG” is the second tourist cruise ship to visit the port of this city in recent times, as last December 13th, 2012 the boutique cruise ship “The World” paid a visit to Puerto Plata and re-started a tradition that was common 2 decades ago when the North Coast was the top destination in the island and the Caribbean. Given the hotel rooms and private villa rental offers now available in the area, this can be a great opportunity for the North Coast to provide jobs to many that were laid off due to slower tourism in the past few years. Cabarete,  Sosua , Cabrera and Cofresi are now considered top destinations in the island given the beauty of  its  beaches and the varied landscape.

S Hamburg is a 15,000-ton, 420 passenger, luxury cruise ship owned by the Hapag-Lloyd cruise line; but is now operated by Plantours. She was built in 1997, in Wismar, Germany.

The arrival in the early hours of Thursday, of the “New World” Cruise ship at the city harbor, with 223 passengers, opened a new age for tourism in Puerto Plata. The ship arrived when the clock marked 7:30 am in the morning, as planned by the authorities of the Ministry of Tourism and the Dominican Port Authority, who awaited in this city to welcome this cruise ship coming from Miami, United States.

To say that the ship caused widespread admiration among the people of Puerto Plata is an understatement, because many cried “the cruise ships are back”, in reminiscence of the 80`s when Puerto Plata was the top cruise port destination in the Dominican Republic. Others, however, welcomed the presence of these cruise tourists, executives from the company that brought it to this area, the crew and officers of the liner.

The “The World” cruise ship is registered in the Bahamas (Nassau), is a boutique-style boat captained by Dag H. Saevik, Senior Captain, and Antonino Cardillo, Hotel Manager, where they travel with 223 passengers, plus crew staff and other workers. The visitors were received by officials of the Ministry of Tourism, Dominican Port Authority, government officials, hoteliers, tour operators, and other representatives of institutions linked to this activity, which welcomed these cruisers.

The cruise ship “The World” is a world-class private yacht with 165 privately owned condos and suites.

The last cruise ship to visit Puerto Plata was seen in 1986, so this visit is considered to have a strong impact on tourism for the North coast. Carnival Cruises built a new hub port for cruise liners in Maimon, Puerto Plata that started operations in 2015. Local authorities highlighted the importance of this visit, including port Administrator Juan Musa, who noted that tourists loved the natural beauty of Puerto Plata and  its  importance as a landmark and historical first in the Americas.

Puerto Plata was Taino land when Christopher Columbus first came to American back in 1492. It was the first of many landmarks related to the discovery of the new world, including the first Spanish settlement in the Americas. Recently, the Dominican Republic was featured as Best of the Caribbean 2012 by Caribbean Travel and Leisure. Another cruise line ( Royal Caribbean ) was in talks with President Danilo Medina about construction of a larger port in Samana.

The widespread construction of luxury condos and villas in the North coast combine with existing hotels to provide thousands of rooms and lodging units to supply the demand for accommodation in the area, specially in  Sosua , Cabarete, Cofresi and Cabrera.

World class MSC Cruise Ship initiated the Dominican Republic as a Caribbean hub for the cruise industry, with its first visit to get locally produced perishable goods and provisions. The Italian cruise line Mediterranean Shipping Company (MSC) began operations in the country yesterday with the arrival at the port of Santo Domingo of the vessel MSC Lirica, which brought 1,800 European tourists traveling to several Caribbean islands, in addition to a crew of 800 people.

The vessel arrived at 9:00 am, to depart at 11:00 pm with a  destination path that includes La Romana, San Martin, Martinique, Guadeloupe, Antigua and Barbuda and the British Virgin Islands. During a tour of the boat, the executive director of Sans Souci Ports, Jaime Jorge Castillo, said that this boat will get their supplies of various agricultural products in the country, as well as take advantage of the tours offered to enjoy the attractions of Santo Domingo, which will have a positive impact on the Dominican economy.

He explained that the arrival of a cruise leaves the country between U.S. $ 180,000 to U.S. $ 200,000 (per day), taking into account the services that the country has to offer. He said The MSC Lirica will visit the Dominican port MSC 10 times during this cruise season. “The MSC is also very popular and has a notable influx of European cruisers, especially French nationals, with interest to know and enjoy the city of Santo Domingo,” he said Castillo.

He said the Port of Santo Domingo and its terminal is ready to receive cruise ships. While recognizing that there are still challenges to face and areas for improvement, Castillo highlighted the joint effort of several public institutions to promote tourism. For his part, the ship’s captain, Raffaele Iaccarino said MSC is a family cruise line, so from now on going the Dominican Republic will be part of that family. He highlighted the benefits that the country offers. During the inaugural MSC Lirica touch was the traditional exchange of plates, since it is the first time that vessel reached the port of Santo Domingo.

The tour around the boat included executives from Sans Souci Ports, the mayor of Santo Domingo, Juan De los Santos, the director of the Port Authority, Ramon Rivas, the director of the Ministry of Passenger cruise, Orfelia Salazar, the president of Maritime Dominican Karster Winder and journalists from different media. MSC Lirica. This ship has a capacity for 2,200 passengers. Among its amenities are interior staterooms with ocean views and balconies, a theater, nightclub, casino, bar, two restaurants, beauty salon, shops, spa, video arcade, swimming pools, among others.

The executive director of Sans Souci Ports called on the Dominican community for them to be good hosts of tourists visiting Santo Domingo through the cruise, to highlight the benefits and dynamism left in the city as a result of the different activities and foreign exchange generated by thousands of visitors. The island has become a focus of interest for various cruise ship companies including Royal Caribbean and Carnival Cruises. 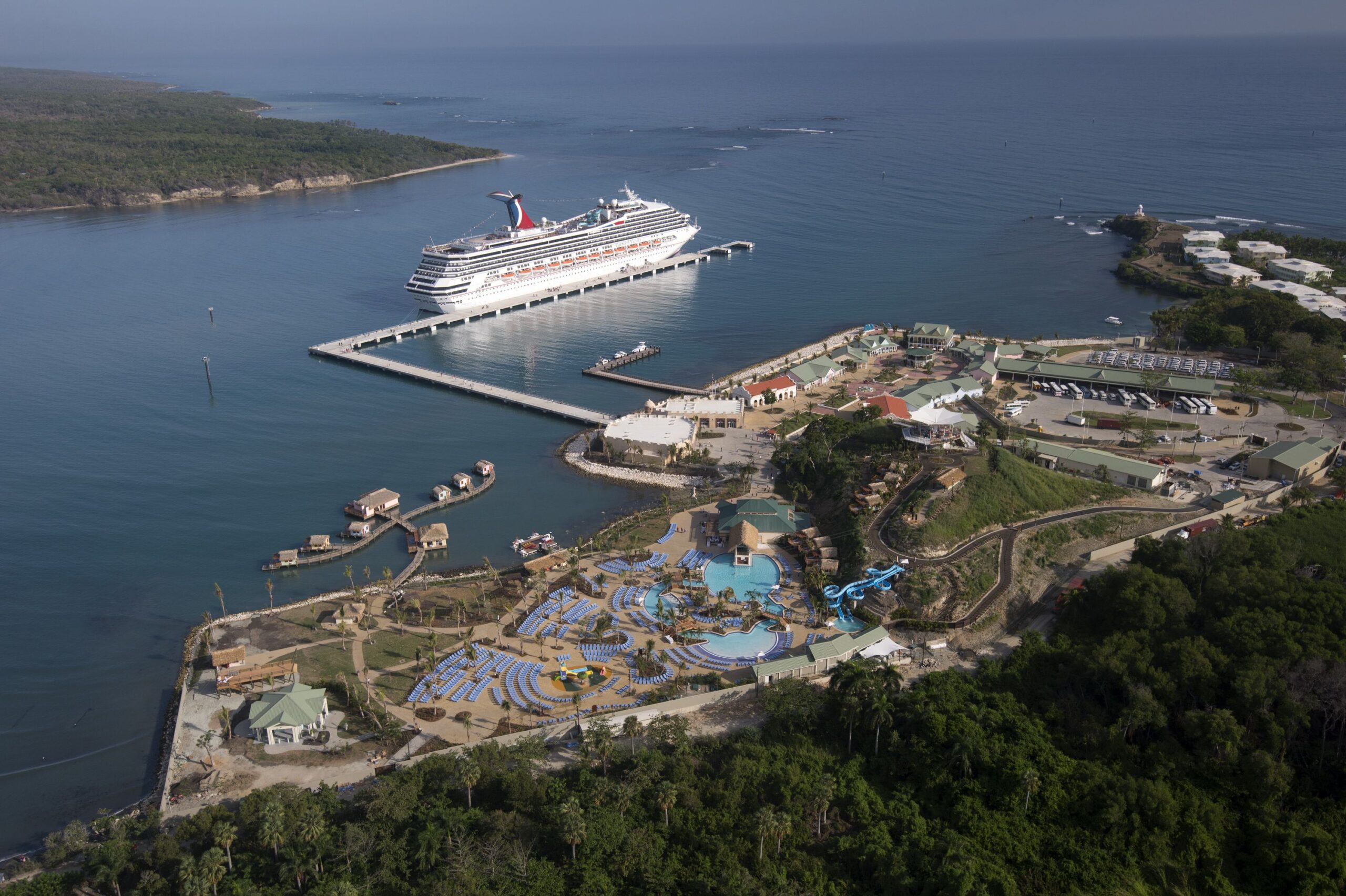 The port of Amber Cove seen in an aerial photo.

President Danilo Medina met  with executives from the Royal Caribbean cruise line, aboard the “Explorer of the Seas” ship docked in Samana, where the head of state traveled by helicopter and whose visit had access only for the official press . In the interest of promoting and boost cruise tourism, the Dominican president accepted the invitation of Royal Caribbean, whose vice president, Michael Ronan, presented the deployment strategy that will continue in the coming years and provides for the possibility of increasing cruise ship arrivals to that area.

In his presentation, Michael Ronan expressed the readiness of Royal Caribbean to work with the Dominican authorities in the necessary transformation of Samaná, so that it is able to receive arriving cruise passengers by providing better transport services, information, infrastructure, road safety and organization, among others, especially individual tourists, who do not buy excursions.

“I want to work so they can bring more tourists and more people to benefit from tourism,” said President Medina, saying that the Dominican government will do whatever is necessary to support cruise tourism turn the Dominican Republic into a main Caribbean cruise terminal. At the meeting, Federico Schad, from Bahia Cruise Services, offered details of a project to build a new dock in an area of 50,000 square meters next to the existing pier, which would provide more infrastructure facilities, better services and better views to cruise passengers visiting Samana and would be operational for the 2013-2014 season.

Schad said that it could take advantage of the cruise market that operates year-round, especially from the U.S. East Coast, allowing Samaná compete with other ports in the Caribbean, receiving between 800,000 and one million cruise passengers to year.

Initiatives
In another effort to make tourism the engine of national development, President Medina reaffirmed the government’s support and detailed project plans, and requested a full presentation of all these initiatives, to be channeled through the corresponding authorities.

At the meeting, President Medina also heard Samana`s mayor Miguel Bezi, and Rafael Blanco, president of the Tourism Cluster of the area, who spoke about the shortcomings of the province and its possible solutions. White spoke of the need to work for a comprehensive tourism system that takes into account the community, to guarantee the sustainability of the investments made in the sector.

After the meeting, Michael Ronen gave out information materials and a souvenir to President Medina, who was subsequently shown the cockpit, where he was received by the captain of the ship. Later they had lunch with Royal Caribbean executives, administration officials and provincial and municipal authorities. President Medina was accompanied by the presidency ministers, José Ramón Peralta, from Tourism, Francisco Javier Garcia, and Public Works, Gonzalo Castillo. Also, the provincial governor, Lalane Enriquillo and the Dominican Port Authority director, Ramon Rivas.

Update: the Port of Amber Cove has had a tremendous impact in Puerto Plata since its opening. Now the city is considered a model for security and cleanliness. A second major port on the way will open January 2021, the Taino Bay.